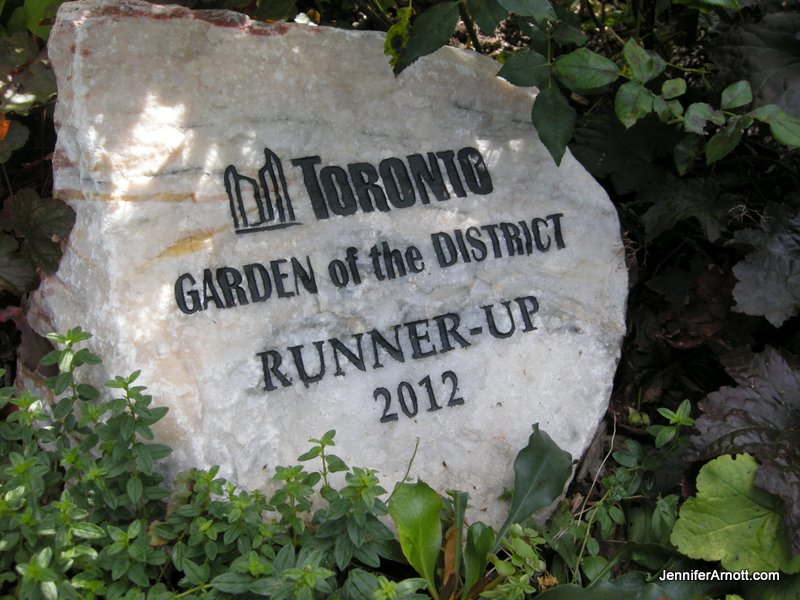 In 2012 I was nominated for the Toronto West District Great Gardens Contest. After a summer of compulsive deadheading, weeding, and fussing over my garden, wondering when judges were going to show up (and a couple tense evenings watching through the window as they did—wondering what they were looking at and whether they thought it was good or bad), I received  a call to say that I had won first place in the Environmental Garden category for Ward 11. The caller then went on to say that I has also placed second (runner-up) for Best Garden of the District!

The garden was nominated in June and then judged on four or five separate occasions throughout July and August. Shortly after learning that I had won, I took a few shots of the front garden…

This is the view from the street. The garden was classified as an environmental/alternative garden because there is no grass. Points are awarded for things like mulching, using soaker hoses and rainbarrels, providing habitat for wildlife, etc.

I’ve been told that having great planters is essential for doing well in this competition. A few of mine:

“Wasabi” and “Ruffles Copper” coleus are the stars of these pots.

I had pots of plants, everywhere, including in front of the garage:

Several varieties of coleus and a Rudbeckia “Trioloba” start this display at ground level, and then draw the eye upward to a hanging basket of red geraniums and Bidens.

This dinner-plate dahlia (variety unknown) put on a fabulous show.

2012 was the fourteenth year since amalgamation that the City of Toronto Etobicoke York District has held a garden contest. Both the former Cities of Etobicoke and York held garden competitions in prior years. Each year, since 1998, judges from the four horticultural societies in the area have volunteered their time to judge the 250 to 350 gardens nominated for this prestigious award. There are 46 volunteer judges for the 2013 competition.

Every garden is judged in the first round in July, and then a point system is used to determine successive rounds of judging for those gardens that qualify throughout July and August. A garden can be judged up to four times during that period!

Only the front gardens are judged for residential properties. The size of the property is not important; small gardens have won the top prizes some years.

Winning gardens are selected for each ward and in several categories; Traditional, Alternative/Environmental, Commercial/Industrial, and Other Properties. The best garden of the entire West district and a runner-up are also chosen. Judging criteria include design, use of plant material, condition and maintenance, hard landscaping, environmental practices, community contribution and distinction.

Winners are notified in August, and then honoured at an awards ceremony at the Old Mill Inn in the fall. Shortly thereafter, an engraved stone award is installed in the first and second place winners gardens. The 2012 Toronto West District Great Gardens Contest was sponsored by The Old Mill Inn and Plant World. The Toronto West District includes wards 1-7, 11-13, and 17.