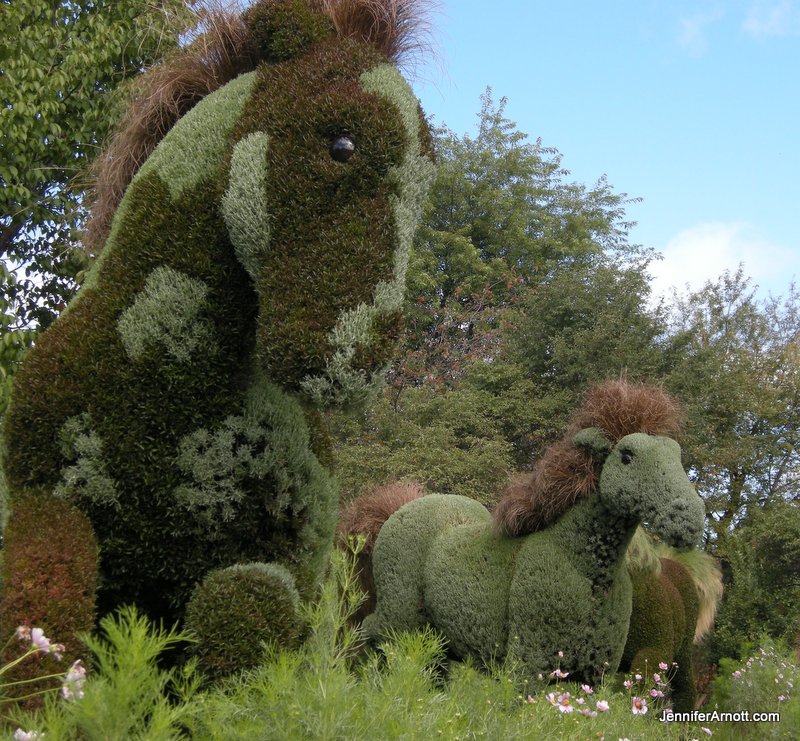 I’ve just returned from seeing the Mosaïcultures Internationales de Montréal at the Montreal Botanical Gardens. This is both an exhibit and an international competition, featuring living sculptures from more than 20 countries. What these talented horticulturalists, artists, structural engineers and others have created is awesome.

According to the Mosaicultures website, “Mosaiculture is a refined horticultural art that involves creating and mounting living artworks made primarily from plants with colourful foliage (generally annuals, and occasionally perennials)… This multifaceted and complex discipline, an ornamental art, draws on numerous practices: on sculpture for its structure and volume, on painting for its palette, and on horticulture in its use of plants in a living, constantly changing environment. Mosaiculture should be distinguished from topiary, which features mostly shrubs pruned to create different shapes.” (emphasis in the original)

This show was a complete delight to visit. I shot far more photos than I can safely fit on this blog. I consider that quite an achievement since I dropped my camera part way through the first day of my two day visit (argh!) and knocked the shutter button off. While mourning my loss and contemplating another day and a half of nothing but a blackberry to take pictures with, I macgyvered a solution, using a small twig to depress the sensor on the shutter. It was awkward, but it worked. Necessity truly is the mother of invention!

Here are a few of my favourite displays (click on a thumbnail to enlarge and see captions):

Wish You Had Been There!

The most impressive sculpture in the show is the hardest to convey to someone who wasn’t there, largely because of it’s size. It was HUGE–I’ve read that it’s 18 metres across and six stories tall. But more than that, it had presence. Whether it was the music being piped throughout the area (ethereal, with bird calls mixed in) that called for you to just sit and absorb, or the hushed reaction of other visitors, The Bird Tree was a show-stopper.

Click on the image below twice to open up a slide show of  my best effort at sharing this creation with you:

According to the Montreal Gazette, designing the Bird Tree took six years and 200,000 plants to complete. To add to the complexity, the garden’s horticulturalists had to be trained in rock climbing in order to maintain it! Our first day visiting, large boom-lifts were used to enable staff to perform maintenance on some of the hard to reach areas. The second day, horticulturalists in hard hats, waders, and safety harnesses sploshed across the pool and then scaled the tree to trim and replace plants.

The sculptures are exceptionally well laid out along a 2.2 km circuit. I’d seen other visitors photos online before going, and wondered how the photographers had managed to get pictures of the sculptures without crowds of people interfering. Was this not a popular attraction? One look at the ticket lineups and I knew that there was no dearth of visitors! But once I started touring the exhibit it became evident that the planners had positioned the works so that, with a few exceptions, you could take an unobstructed photograph. Sometimes it required a little bit of patience, but it was possible.

Mother Earth was one of the larger sculptures (yet still smaller than the Bird Tree). Including some of the crowds in the shot was helpful in order to get a better sense of its size.

And sometimes, letting other garden visitors into the photo frame produced charming results: