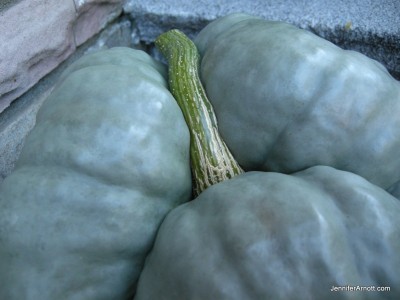 This is the time of year when gardeners in my part of the world look out at the snow and ice, shudder, and hunker down with a pile of seed catalogues or park themselves in front of the computer and get lost in seed company websites. So it was with me last year. I was perusing heirloom tomato seeds, making my list and checking it twice, when, for some reason, I clicked on the pumpkin seed page.[shashin type=”photo” id=”232″ size=”large” columns=”max” order=”user” position=”left”]

Now pumpkins take a LOT of room to grow. And I don’t have a lot of room, by vegetable growing standards. I garden in the city–urban gardening and pumpkins don’t really dance well together. But there I was, on the pumpkin page, and there I saw a most beautifully odd looking blue pumpkin*–it was named Triamble (Curcurbita maxima). A few clicks later and I was reading wonderful things about it on several websites, including that it was a “rare and unusual” pumpkin from Australia, dating back to the 1930’s at least, and it was reputed to “keep” up to two years! At the words “rare and unusual” a package of Triamble seeds were added to my order, almost instantly.

I have had difficulty growing anything related to a pumpkin (including zucchini) in my garden, because of a yearly infestation of striped cucumber beetles, so I wasn’t overly optimistic that I’d actually be able to grow a mature plant with fully developed fruit. To improve my odds, I shared some seeds with my father and a farmer from my local farmer’s market (I don’t think any of his customers had ever given him seeds before–he looked quite confused at first as to what he was supposed to do with them).

But I started my plants indoors in May, had very good germination, and set out one plant near the end of May. To battle the cucumber beetles, I kept it covered with a piece of Agribon row cover (a sheer fabric that keeps bugs out but lets sun, water and air penetrate) until it outgrew the fabric. Which didn’t take long…

It grew up, into a Blue Arrow Juniper, and onto a wooden arbour. Fortunately, it’s a fairly attractive plant, and its flowers looked quite nice alongside the clematis and roses that normally have the arbour to themselves.

It was neat to watch the plant grow, bloom, sprout baby pumpkins, grow larger, and eventually change from green to greenish-blue-grey (click on any of the images to enlarge)

They weren’t large in circumference (they were similar to a bowling ball that you’d use for 10-pin bowling) but they seemed heavy for their size. And I have to say, they were quite unusual and beautiful looking. One even helped me win “Judge’s Choice” at my horticultural society, as part of a collection of vegetables that I entered in the fall show![shashin type=”photo” id=”231″ size=”medium” columns=”1″ order=”user” position=”left”]

I kept the harvested pumpkins on the front porch to cure for a few weeks, and then brought them inside to store in a cool dark place. When I eventually broke one open, they were as dense as expected, and a beautiful shade of orange.

When grated, one pumpkin yields between 8 to 10 cups.  There are lots of ways to cook pumpkins, but my favourite so far is the Savory Greek Pumpkin Pie recipe in Madhur Jaffrey’s World Vegetarian cookbook.

One of my friends, who is from Greece, told me about a dish her mother used to make (and which my friend still makes) with pumpkin and phyllo and feta; it sounded delicious. So when I came across the recipe in this cookbook I was quick to try it out. It’s since became part of my regular repertoire.

I haven’t seen the full recipe from Madhur Jaffrey’s book posted online, so I’ll just show you the basics of how it’s made. If you want the actual recipe you’ll need to get your hands on the book. (Please click on the first image to enlarge so you can read the captions, then use the arrows to proceed to the next picture)

*I call Triamble a pumpkin, but it might more properly be classified as a winter squash. I’ve seen it listed as both and I’m hard pressed to know exactly what the difference is (if you’re really keen, you can read more about the distinctions here).