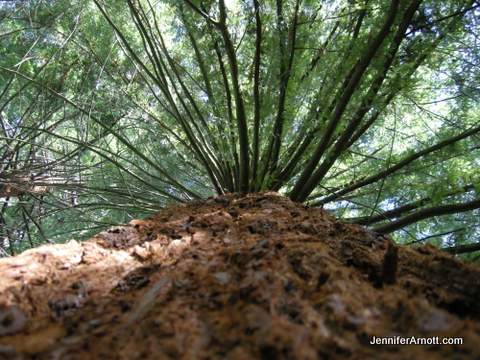 I was fortunate to travel to Vancouver in late November on a business trip. This is the second time I’ve visited the area, and both times it’s been late fall–I think it’s lovely to visit the Vancouver area at any time, but if I was going on a trip to visit gardens, this time of year certainly wouldn’t have been my first pick. However, since I was there I took advantage of three free hours before my return flight home to visit VanDusen Botanical Garden. Conveniently, it is located right in Vancouver, fairly close to the airport.

The garden was filled with beautiful and/or clever touches, noticeable almost as soon as you set foot on the property. As I walked in I passed by what looked like quite an elegant restaurant (perhaps for a future visit?) in a building of its own, and headed towards the curvy vistors centre (a new building so “green” it exceeds LEED Platinum status). Along the exterior wall were three displays marked “Today in the Garden” to show visitors what’s currently in bloom or of interest.

I think these exhibits are a wonderful way to highlight the gardens, especially for visitors who might not otherwise notice some of these treasures, or who might think that on say, a chilly November day, there would be nothing of interest.

Upon entering the visitor’s centre I was completely distracted by the gift shop, right at the entrance, which happened to be having a large “garage sale” to clear out older merchandise. 75 per cent off some wonderful garden and garden-themed finds? Hello! All I’ll say is that all my purchases fit in my suitcase, after some careful positioning and the application of a bit of brute force.

Once I made it past the gift shop, I ventured into the gardens themselves and learned that late November is really a great time to visit VanDusen! The experience is certainly different than if you’re there in May or July, but I was able to appreciate the space in a way that you just couldn’t if it was crammed with people and their paraphernalia.  My guess is that there were about 25 other visitors on the 22 hectare site, and most of those I only saw later, at the cafe, when I stopped in for lunch (which was delicious).

The plants that most interested me were the ones that were different from what we can grow in Toronto. One of the first that caused me to pull out my camera was an Evergreen Magnolia (Magnolia ‘Monland’). [shashin type=”photo” id=”241″ size=”large” columns=”1″ order=”user” position=”left”]

As I approached the giant shrub/small tree I wasn’t sure exactly what it was, although its shape and structure reminded me of a rhododendron. Once I was closer I realized that this was what I think of as “southern” magnolia. It’s not quite cold-hardy in Toronto, but it is familiar to me as every year I buy cut branches of it at Christmas to decorate outdoor urns and wreaths. The back of each leaf is a lovely brown colour and kind of fuzzy. “So that’s how it grows!” went through my head (and probably came out of my mouth) when I was close enough to read the plant tag. [shashin type=”photo” id=”242″ size=”medium” columns=”1″ order=”user” position=”left”]

Next to pique my interest was the garden’s small grove of Metasequoia glyptostroboides or Dawn Redwoods. I’ve met some of these gorgeous giants before, in California. [shashin type=”photo” id=”245″ size=”large” columns=”1″ order=”user” position=”left”]

VanDusen’s collection of redwoods is relatively young, so they weren’t as overwhelming as their 3,000 year old cousins, but I still think they’re a really cool tree. For one thing, the bark is almost hair-like:[shashin type=”photo” id=”244″ size=”large” columns=”1″ order=”user” position=”left”]

I spent quite a while looking up and enjoying the canopy, then trekked through the gardens until I came upon the Monkey Puzzle (Araucaria arucana) trees.[shashin type=”photo” id=”250″ size=”large” columns=”1″ order=”user” position=”left”]

The overall shape is like a “normal” evergreen conifer, but closer inspection reveals that they are anything but (click any image to enlarge):

Most peculiar! Most of the collection is clustered together, but there is also one fairly large Monkey Puzzle tree that marks the center of the garden’s impressive maze:

The shimmering white line to the right of the maze are the plumes of some tall ornamental grasses–these were located throughout the garden, catching the light.

I was interested to see the method the gardeners used to protect some tender plants for the winter–it looked like they covered them with straw and then layered on some large leaves (possibly castor bean?). Kind of decorative and a good use of the garden’s own resources.[shashin type=”photo” id=”256″ size=”large” columns=”1″ order=”user” position=”left”]

Of course, no public space is immune to graffiti of some sort, and I did find some at VanDusen. However, it made me smile to see this act of graffiti on a bust of David Douglas (a Scottish-born botanist from the 19th century who discovered, among other things, the Douglas Fir):[shashin type=”photo” id=”258″ size=”large” columns=”1″ order=”user” position=”left”]

Without the distraction of flowers and foliage I was able to see familiar plants in a new way. For example, it wasn’t until I rounded a bend in the path and came upon this…

…that I realized that once their leaves drop off, Staghorn Sumacs (Rhus typhinia ‘Disecta’), actually do resemble stag horns! And up close, they even appear to be covered in fur. “Huh!” [shashin type=”photo” id=”268″ size=”large” columns=”1″ order=”user” position=”left”]

There were many times I said “I never knew that!” or remarked at the cleverness of something out loud (perhaps it was good that I was nearly alone on the property!) This continued even as I left the garden. As I turned out of the driveway and onto the street, I looked up. The post holding the street sign was very clearly (and cleverly) marked! I noticed that all the posts that surrounded the garden had been treated in the same manner. Nice touch! [shashin type=”photo” id=”274″ size=”large” columns=”1″ order=”user” position=”left”]

The day I visited VanDusen, a friend reminded me that VanDusen’s former Garden Director  is Harry Jongerden, the recently appointed Executive Director of the Toronto Botanical Garden (TBG). Having seen what a fabulous place VanDusen is (even in winter) I am quite looking forward to seeing what creative touches and innovative ideas he brings to the TBG!