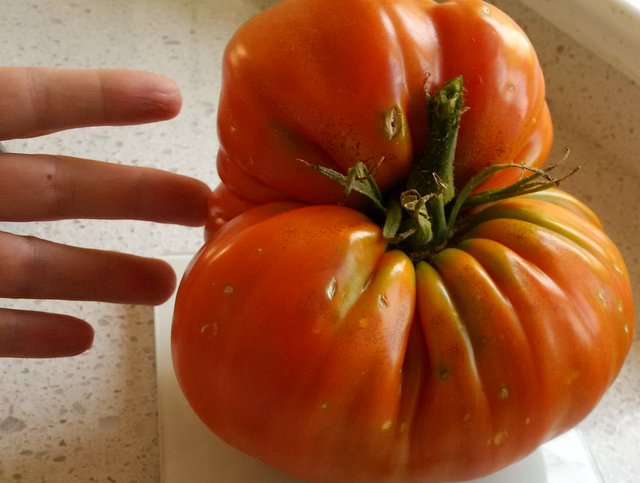 Today marks the first time I’ve ever harvested a tomato that weighed more than kilogram!

I haven’t sliced into it yet, but I’ve had others off of that plant and they were quite tasty. The one I tried yesterday weighed about 700 grams.

Normally, I’m very good about recording the variety names of my tomatoes. But this one, well, that’s not the case. I scribbled down part of the name as “Pomodori” but there was more to it than that. Since the internet tells me that “pomodoro” is Italian for tomato, I’m sure there was more to it than that. I have an inquiry out to the person who gave me the seeds, and we’ll see if he has a record somewhere.

UPDATE: The variety is Sicilian Saucer from William Dam seeds!

Besides the garlic and tomatoes, I’ve also been picking bush beans and zucchini. Arugula and Swiss chard (which I discovered I like to look at much more than eat) have been plentiful for quite a while, along with alpine strawberries. The raspberries are finishing off but the blackberries are just beginning.